Chlorine Pucks In The Skimmer Basket 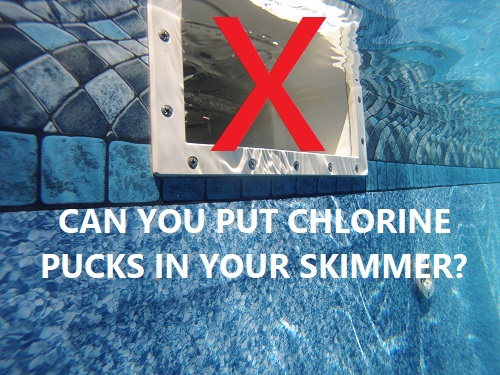 It is okay to put chlorine pucks into your skimmer basket or pump strainer basket to help them dissolve? For as long as there have been swimming pools and chlorine pucks lazy pool owners have noticed how convenient it is to just toss a few pucks into the strainer basket. It almost looks as though the skimmer strainer was purpose built for adding chemicals like chlorine to your pool...the only problem is that it totally wasn't.


First things first you need to be specifically aware that when you build a pool there is a specific spot where the chlorine injection system needs to go. Like a salt water cell for example which generates tiny amounts of chlorine from sodium chloride over long periods of time, when you read the installation instructions for a salt system it tells you specifically that the cell must be installed last in the system, directly before the water gets returned to the pool. Why would they say this? The answer, very specifically, is to avoid sending concentrated chlorine through any other part of your pool equipment.


Salt systems are not the only peripheral sanitizer delivery system that instructs you to add chlorine last before returning the water to the pool. Every last sanitizer delivery system that you can buy also specifically instructs that you must install the system as the very last component before the water is returned to the pool. Right about now you should be starting to see the light here. There are a lot of warnings in place about where the chlorine needs to go in relation to your pool equipment, and with good reason.


Prolonged chlorine in pool equipment - Over the lifetime of operation any pool system exposed to sustained high levels of chlorine will deteriorate at a faster rate than the same system that is not exposed to high chlorine levels. Something like the plastic internals on a pool pump for example, or more often internals of a pool filter like a sand filter with a fairly delicate stand pipe and lateral assembly will see higher rates of failure and shortened service life from chlorine damage. Something like a pool heater with a copper or cupro-nickel heat exchanger could see extensive damage in weeks or months from chlorine, not years. This is why pool heaters need to be protected from chlorine, and one of the primary reasons all sanitizer delivery systems warn to install downstream of all other equipment.

Concentrated chlorine in the skimmer - The plastic skimmer body as well as the pipe connection to the underside of the skimmer are both areas of major concern from chlorine damage. Just like the pool equipment a constant exposure to higher (than normal) levels of chlorine will reduce the service life and cause the plastics to become brittle over time. If you turn off your pump the damage and concern rise greatly. Intensely concentrated chlorine will develop in the skimmer once the pump turns off, likely well in excess of hundreds of parts per million, and this damages the skimmer body, strainer basket, skimmer lid, but most especially the pipe connection on the underside of the skimmer. Chlorine sinks and as a result the highest concentration of chlorine will be located in the bottom of the skimmer where damage to the pipes and pipe connection can happen. Flexible PVC in particular suffers from chlorine pucks in the skimmer as the concentrated levels will cause the PVC to absorb water and swell in size, a chemical reaction that leaves the pipe distorted and heavily restricted to flow. In some cases it can close off the connection point entirely. The pool surface directly outside of the skimmer mouth will also sustain damage and staining from chlorine levels that are too high escaping from the skimmer. Vinyl liner pools in particular can suffer from chlorine induced wrinkles around the skimmer mouth, something that is not fixable other than replacing the liner and changing the location that you add chlorine pucks to your pool.


Concentrated chlorine in pool equipment - When you have chlorine pucks in your strainer basket and you turn off your pump the chlorine continues to dissolve and concentrate until the pump turns on next. When it does the very first thing that happens is the intensely strong chlorine concentration in your skimmer gets drawn into your pump, filter and (hopefully not) heater. Chlorine this strong can easily cause damage to things like your heater internals, even from short exposure periods like this, no differently than you could sustain damage from someone throwing chlorine all over you, even if they rinsed you off right afterwards.


Dangers of concentrated chlorine - You should never have concentrated chlorine developing anywhere in your system. Pucks in your skimmer is not just bad for your pool but also can be a hazard to swimmers as well service workers. With the pump off you could have hundreds of parts per million of chlorine in your skimmer, so what would happen to someone who swam up to the skimmer and looked in as people often do. Even worse, what if they were swimming underwater with their eyes open towards the skimmer opening. That would be like diving into a bowl of bleach, eyes first! The chlorine gas that gets contained in the skimmer can be so strong that lifting the lid and looking into the skimmer could result in temporary blindness and a trip to the hospital. And that is from a full grown service worker like myself, never mind if little Billy or Sally were the ones to amble over and pull the lid of the skimmer. Being shorter and much closer would definitely result in a more serious blast from the chlorine gas in the skimmer. Scary stuff.

The point of this argument can be diluted down to the core element which is you want to add chlorine to your pool and a strainer basket looks like an easy way to do this. However there are many downsides, including very expensive ones as well as safety issues, so you should definitely not do that. Fortunately there are very easy solutions to this problem which means you should never have any reason to put chlorine into your skimmer or pump strainer basket. First, maybe you should not be using chlorine pucks at all. Adding stabilized chlorine to your water is not something you should be doing unless you understand how too much stabilizer will require that you partially drain and refill to keep your CYA numbers down in the 30 to 50 parts per million range. Chlorine pucks have a lot of CYA in them and every one you add puts you closer to needing to drain again. In water restricted areas or places with rural water supplies this can be very expensive for pool owners.

Chlorine puck erosion feeders are the purpose built device made for dissolving chlorine pucks into your pool water. These units are cheap to buy and easy to install and completely eliminate the potential for concentrated chlorine to damage your pool equipment. Almost completely. Chlorine is actually so damaging in concentrated amounts from dissolving pucks that extra protection needs to be installed to protect heaters. You can read more about this in this article about how to protect your heater from chlorine damage. You can buy both offline feeders

models, with the offline models being better for flow dynamics of your pool system.

If buying a $100 erosion feeder would add 25% to the total price of your pool then I suppose you can make an argument for not buying one, however you would then be the perfect candidate for a simple puck floater. A floater is not as good as an erosion feeder because a puck floater can get hung up in certain areas, or end up in the skimmer which puts you at the same problem as before with the chlorine going directly through your equipment. They are however very affordable for any pool, and you can try to tie up your floater to keep it away from your skimmer mouth to minimize the potential for any damage from concentrated chlorine. Also, if you like to show off your flair you can choose from some pretty interesting chlorine floaters like this

With so many different options, and very affordable ones at that, there is no reason to be damaging your expensive pool equipment with chlorine, or creating a potentially dangerous situation with your pool. It is definitely acceptable that you did not know about chlorine in your skimmer being a problem, or not realizing that erosion feeders are available, but now that you know you really should stop adding chlorine (or pretty much any chemicals) to your pool skimmer. I would also like to note that there is at least one chlorine puck product that advertises as being "safe to use" in your skimmer. It is not safe to use in your skimmer. I would agree that it could be slightly less of a problem, as the chlorine is limited with the ability to dissolve fast with proprietary agents, but it is still chlorine and it is still going directly through your pool system. Unless they offer a guarantee to replace your pool heater if it fails early, which they definitely do not, then you should not, absolutely SHOULD NOT, put any chlorine products into your skimmer.


Protect your heater from chlorine with a check valve

what is pool stabilizer?

Why did my pool water turn green?