As a swimming pool veteran I have heard just about every swimming pool myth you can image - and most of them are just that...myth. Consider some of these common misconceptions about swimming pools (and one shockingly true myth!):

Unless you are Tim The Toolman, or possibly named Cleetus, shopping by horsepower for a new pool pump is a fool's errand. Horsepower is just energy, specifically 745.7 Watts of power per HP. So effectively the HP rating for a pump is simply an indication of how much it will cost to run the pump. So if you have one pump that is 1 HP and moves 30 gallons per minute of water, and you have a second pump that is a million horsepower and also moves 30 gallons per minute of water...which is better? The one that cost less to run obviously! Pool pump manufacturers know that pool owners shop by horsepower rating so they play with the service factor rating to make the HP rating label appear really impressive. If you want to actually get what you pay for with a pool pump then you had better learn to shop according to flow rates.

Shopping according to flow rates that a pump can provide under specific conditions, such as resistance to flow (called head) is the best way to level the playing field and choose a pump that will meet your flow requirements while costing as little as possible to operate. If anything, the horsepower rating on a pump should be a clear signal of which pumps to avoid since the higher the number, the more the pump costs to operate. Leave the rocket powered, nitrous boosted pool pump to Tim and buy yourself the smallest HP pump you can find that will meet your flow needs.


"I Am Allergic To Chlorine" 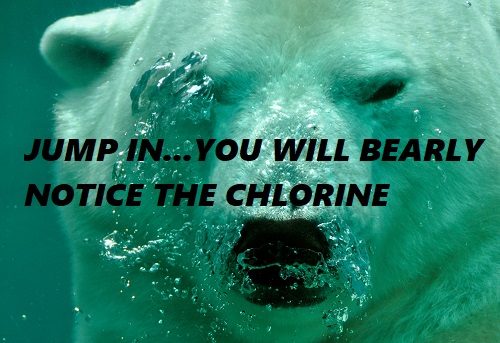 Maybe, but probably not. This is something that pool technicians and water labs hear on a daily basis from customers. If the clients in a pool store were a good market sample then half of the population of North America would be allergic to chlorine. While it is possible that you are allergic to chlorine, as some people actually are, the vast majority of people with this complaint are:

A) Sensitive to pH levels

B) Not balancing their pool properly

Municipal water sources across North America are treated with chlorine and water arriving in your home very likely has a measurable chlorine level. Can you drink water from your tap? Are you able to take a bath or shower in your house? If so - you are very likely not allergic to chlorine. People who switch to bromine or salt water to get away from chlorine exhibit a fundamental misunderstanding of chlorine sanitizer. Salt water is chlorine, and bromine will not solve your problem if you are in fact simply sensitive to imbalance in the acidity of the water. Remember, bears are attracted to people who are allergic to chlorine so always think twice before making this claim...there may be a bear within earshot!


Chemicals For A Pool That Changes Color When You Pee 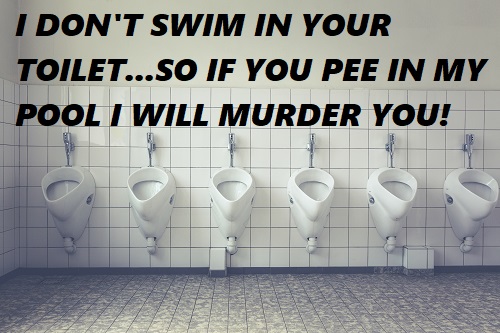 This is true, but in a more accurate way, completely not true. This is one of the largest swimming pool myths but one where the origin is no secret. No self respecting pool owner wants people relieving themselves in your pool since, you know...that is super disguto. In order to prevent this crime against nature a vicious lie was made up by pool owners everywhere claiming that if you pee in the water then the water will change color and everyone will laugh and nobody will like you.

The truth is that there is no such chemical, and you are safe to be as disgusting as you like in someone's pool. Other than increasing the chlorine demand, as well as the amount of chloramines in the water (which make the chlorine smell), there is no chemical reaction that will happen that will show anyone what you are doing. Releasing some air bubbles by accident might give you away however...

In addition to there not actually being a chemical that can do this currently, there is not likely a chemical to become available any time soon with these properties. The technical challenge associated with changing the color of pool water when you pee are too great - men on the moon...no problem. Pee indicator? Never going to happen. 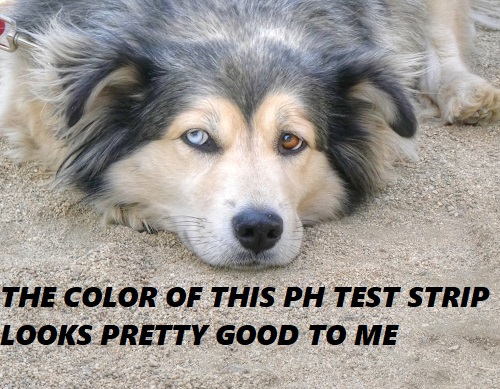 Are test strips for pool water super convenient - yes. Are they great at testing water chemistry - no, not really. Actually, it depends on what you are testing for. Pool water test strips are great for quick testing to verify if there is any sanitizer in the water or not. They are also good for a very rough estimate of the pH, total alkalinity and calcium hardness in the water. It is important however to note that there is no true "test strip" method to test the pH of the water - at best a test strip could be considered an approximation test for pH. Even still - any other value in the water that is too far outside of the normal range can result in the rest of the strip not reading correctly. There are many cases where high bromine or chlorine levels can cause burning or bleaching of the test strip invalidating the results.

In addition to being not-so-great at determining pH, test strips also rely on the ability of the user to judge color differences - especially in the yellow and red spectrums. Since not every person has the same level of color differentiation this can lead to misinterpretation of the test results. When in doubt simply ask a woman since women can see differences in colors better than men. Also worth mentioning is that is it not possible to "test" pool water by just looking at it. A DPD test is the best method for testing at home and test strips are a good quick check method. If you rely on sight to balance your pool water you can rest assured that you are not doing it correctly. 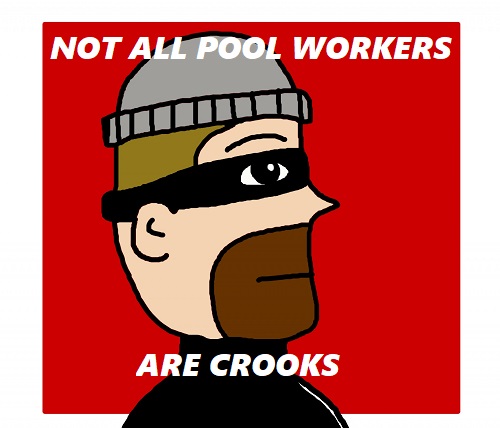 There are a few industries that have a strong negative connotation associated with them such as used car salesmen - swimming pool builders fit squarely into that category. The reason why is multiple-fold. First, in most areas in North America, even up to today, there is no licensing, testing, trade association or government requirements for who can (and who can not) be a pool builder.

Unlike other more regulated trades such as auto mechanics, or electricians, you generally do not require any special training or minimum skill set in order to be considered a "pool builder". This has resulted in an industry-wide lack of congruency in terms of technical process. Each pool company develops an in-house method for building pools. This makes the industry as a whole very volatile as you never know what the last guy who worked on the pool did - which results in very difficult to plan for situations. Combine this with the fact that building a swimming pool is actually a fairly technical process involving multiple trades such as masonry, forming and framing, plumbing, electrical, steel working and design - also combined with chemistry for water balancing. Most cases where pool guys are thought to be scam artists, they are actually just under qualified, or simply not qualified, for the work that you are paying them to do. Just like with other trades there are workers who have the bare minimum level of knowledge and there are those that dedicate to learning as much as they can about the industry that they operate in - if you meet with a prospective pool builder that you would not trust to wash your car properly then you should probably keep interviewing more builders!


Chlorine Is Bad For Your Health 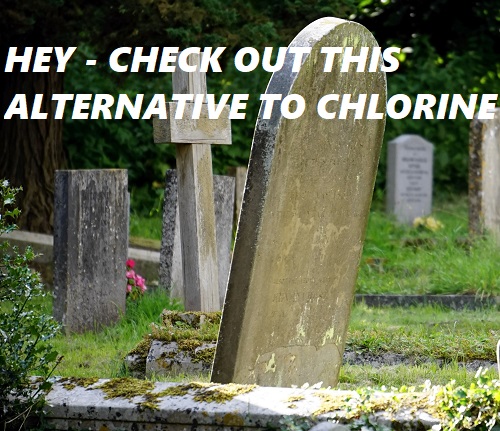 Looking for an alternative to chlorine? How about being dead? There is a very good reason why chemical sanitizers are used in swimming pools and hot tubs. While chemicals are certainly not good for you in many cases and it is very understandable that you would want to limit your exposure to harmful chemicals, it is important to recognize that for the most part chlorine is not one of those. While chlorine is a harsh chemical, and in concentrated doses can be lethal, it is also safe enough to drink...literally. This is why chlorine (and more recently chloramines) are the sanitizer of choice for municipal drinking water. In monitored levels it can provide a fair margin of safety over untreated water which is something that you absolutely want.

In February 1999 in Bovenkarspel Netherlands there was a home show / fair exhibition that included a hot tub that was set up on display for 9 days. At the conclusion of the nine days (following the in-depth investigation) that hot tub was responsible for 319 confirmed cases of Legionnaires disease and the deaths of 32 people (more deaths were suspected but not able to be proven). It is important to note that in this case the people to get sick did not actually use the hot tub - Legionnaires disease is airborne and the majority of people who fell ill either touched the water with their hands or simply walked by its location!. Chlorine sanitizer plays an incredibly important part in safe swimming water. Using things like a UV system or an ozone generator can reduce your need for chlorine but you should still have at minimum 1 ppm of free chlorine in your water at all times. Even 1 ppm of chlorine is not enough to say that the water is "safe" but the vast majority of dangerous bacteria and pathogens will be killed at this level. 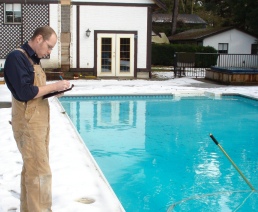